Memorial in honor of the 900th anniversary of Brody

Memorial in honor of the 900th anniversary of Brody – a monument of local historical significance (security no. 1443, Decision No. 450 dated October 28, 1987). This monument is located in the oldest part of the city – Old Brody, in the square on January 22nd Street. The memorial was unveiled during the solemn celebration of the 900th anniversary of Brody on September 14, 1984. The creators of the memorable sign are Lviv sculptors: E.P. Mysko, People’s Artist of the Ukrainian SSR, Honored Art Worker and native of Brody, and B.S. Romanets, member of the Union of Artists of the USSR. Brody is first mentioned in the historical text, The Teachings of  Volodymyr Monomakh to his Children. The text describes the negotiations that took place twice in Brody between Volodymyr Monomakh and Volodymyr-Volyn, Prince Yaropolk Izyaslavich. The reference is made without recording a date. These same negotiations are listed as having taken place in 1084 and 1086 as recorded in the Tale of Bygone Years.  This mention does not include the location of these talks.   Comparing these data gives reason to assert that the meetings took place in Brody. Thus, Brody’s history begins from the year 1084. The memorable sign is a cube of black labradorite with sides of 1.6-2.2 m. It is mounted on a man-made hill 0.8 meters tall.  On the three sides of the labradorite, sealed bronze plates are fixed. On the frontal side is stamped: “Brody 900 years.” On the left – “1084” is inscribed along with the text of the first mention of the city from The Teachings of Volodymyr Monomakh to his Children: “And I will return to Yaropolk on a council in Brody”. On the right  – “1984” is inscribed, along with the following text: “Installed in honor of the 900th anniversary of Brody.”

Literature: Kovalchuk G. Monuments of the city of Brody / Bryshchyna – the edge on the border of Galicia and Volhynia. Issue 3. (Materials of the fourth local history conference devoted to the Day of Historical and Cultural Monuments). – Brody: Brody Historical and Local History Museum. 2010. – p.28-34. 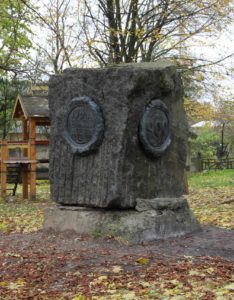 Memorial in honor of the 900th anniversary of Brody