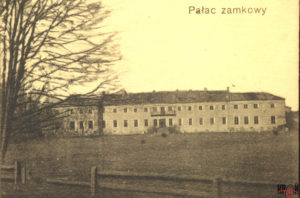 The monument is located on kremlin of the castle, near its northern curtain. The construction of the palace is built of brick and is rectangular in plan. Its main facade is flanked with rozelits. Full height walls are decorated with pilasters of composite order. Base and capitals are of Baroque picture made in stone. The center of the main façade is underlined with balcony. The frequent rhythm of pilasters provides building with festive look and ceremonial character. The building is considered a monument of Baroque architecture. 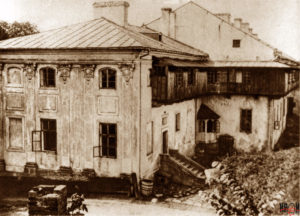 The Castle Palace in the early20th century. View from the north-east side

The palace was first mentioned in 1755, when on the 2 February, it held a wedding of the eldest daughter of the owner of Brody Stanislaw Potocki Teofilia and Kiev stolnik August Moshynskyi in the 19th century. The palace remained the main ornaments of the ruined castle, and about 1833 it passed into the possession of Jan-Kazimierz Mlodetskie. At the beginning of the 19th century Potocki library was kept here, the part of which subsequently appeared in the castle Oron in Switzerland. 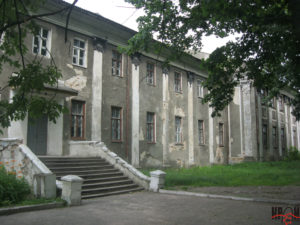 With special care the castle palace was surrounded before the First World War the owner of the castle, Countess Jadwiga Zhyschevska, who restored it,filled with her family monuments and works of art. Her own collection of antique furniture and portraits of the prominent Polish figures was of great importance. Much of this collection completely disappeared or was exported to Russia during the First World War, where from only part of these values was returned. 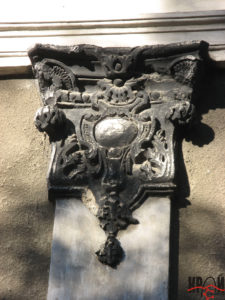 The capital of the Palace

The palace was destroyed due to keeping the various troops there, was burned at the time of Bolsheviks in 1920. Later it was restored. Now the monument is used for educational, cultural and social needs of the town and the region, but needs immediate repair of the facade, roof and gutters. There should also be cultivate a garden in the castle kremlin.