The Brody Museum of History and Local Lore was first created in 1959, but the earliest records of visitors are from 1961, when visitors to the museum were able to learn about the history of Brody and district from over 800 exhibits. 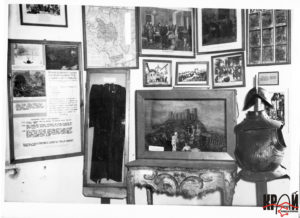 The museum was located in the former Prosvita reading house in the village of Velyki Filvarky, just outside Brody. Thanks to volunteer museum director Y. Illiashchuk, the museum had four themed rooms that featured collections of coins, medals, knives, ceremonial objects, documents from the turn of the 20th Century, and other ethnographic items from the region.

In an effort to revive the museum in 1979, an 18th Century Austrian-Hungarian state building was given for the museum’s use. Under the leadership of museum director Dmytro Chobit, an ethnographer and historian by trade, the museum developed a new series of exhibits. By the time Brody celebrated its 900th anniversary in 1984, the museum hosted its new opening ceremony. Long recognised as a folk museum, it was incorporated as part of the Lviv History Museum in 1991.

The museum has been known as the Brody History Museum since coming under the direction of the Brody district council in 2001. It now features over 5,000 items and another 4,000 scientific pieces divided into 43 categories and located in seven different halls. The collection grows each year thanks to donations from archaeological excavations, modern artists, and personal collections. The exhibition now complements the ‘Brody in the 17th Century’ panorama, artworks from local artists, and banner photos of Brody and district’s historical and cultural monuments. It has also featured a library and exhibition hall since 1995.