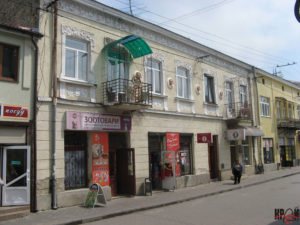 The house of the former bookstore

The object was included in the State Register of monuments by the decision of Lviv executive committee №280 on21 May 199 and was given №1752-m (address:  11,Zolota Street).

The construction is  two-storeyed, rectangular, elongated along Zolota  Street with a gabled roof. The ground  floor is segmented with  shallow rustication. The openings are without frames.

In the window frame and eaves solution there was used a floral motive of secession nature. Wrought iron fences of the first  floor balconies are secessional.

The building was founded in 1862 as a branch premise of Sambir bookstores of John Rosenheim. The bookstore had its own printing house, which operated until 1914. In 1886 this company passed to  Rosenheim’s son- in-law, Felix West. In 1907 the bookstore was rebuilt into  its present form. The institution worked until 1939.

Therefore, the  monument played an important role in the cultural life of the town in the second half of the 19th –the first half of the 20th  centuries  and is an original example of Secession Art  in the town. Now the ground  floor of the building is used for trade, and the first one – for housing.