Building of the Polish Society “Sokil” 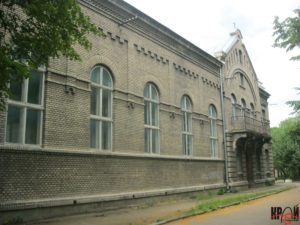 The object was included in the State Register by the decision of the executive committee of Lviv №330 on 24 June 1986 and was given №675-m (address: 7 Kotsiubynsky Street). Memo is  a communal property.

This is a two-storey house, in a volume of the auditorium – one-story one. It is situated  in the turn of  Kotsiubynsky Street that follows the  former defensive rampart (5th  Bastion). Rectangular with a gable roof. The corner two-storey volume is from both directions underlined  by slightly advanced in terms of projection in the facade with triangular pediments. 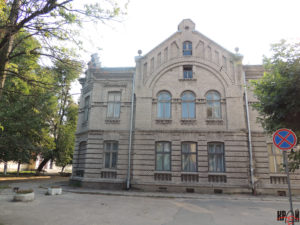 The north view of the Prosvita House facade

Facades, pilasters, traction, etc are  outlined in gray sand-lime brick, as well as the smooth plane of the facade. In the composition of the volumes and decorative facades the construction is influenced by non-Gothic  direction of romantic secession. Significant value is the interior of the auditorium, richly decorated in the above style. 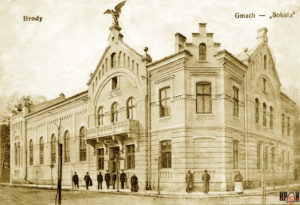 The Seat of the Polish Sokil Gymnastics Society.The postcard of the early 20th century

The building was built around 1910, is the original pattern of romantic secession and acting as a kind of “Enlightenment” still plays an important role in the cultural life of the city.