The house of the former Real School and the first gymnasium, the second half of the 19th century

The object was included in the State Register by the decision of Lviv executive committee №280 on 21 May 1991 and was given №1758-m (address: 3 Maidan Svobody). The  memorial is a  communal property. 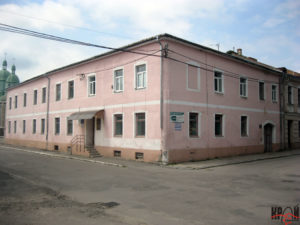 The modern house of the central district library

The house is located in the south western part of Maidan Svobody  within the red line area on the corner of Maidan Svobodyand Stus street. The  space solutions of the buildings is shifted axial.  The two-story construction, divided into  wings by  stairwell, covered with gable roof. The main axis of the building is shifted to the right. Passage in the courtyard is covered with authentic arches of brick. Paving is covered with stone tiles. Facades are plastered with lime-sand mortar, not decorated. For construction there was  carried out a considerable repair work. The floor of the first floor of stone, tile size 20×20 cm.The memorial  hasn’t got distinct characteristics of any style.

This building was built around 1860, after a fire in 1859 as imperial-royal buildings of lower real three-class school in Brody, which in 1865 was reorganized into the imperial-royal real 4-classroom  school. This institution was in this building until 1883, then there was a girls’ elementary school. After World War II the building housed the elementary school and secondary school №1and a student dormitory. And since the 1970s and up to now it has been the central district library. 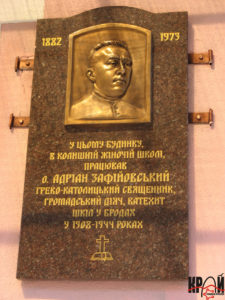 Therefore, since the 1860s this monument has been playing  an important role in the educational and cultural life of the town.