The object was included in the State Register of monuments of local importance by the decision of  Lviv executive committee №330 on 24 June1986 and was given №676-m (address: 8 Kotsiubynsky Street). The monument belongs to the communal property. 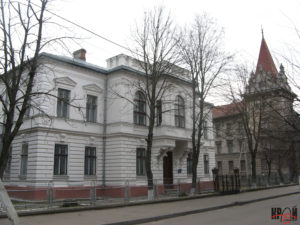 The House of the former Chamber of Commerce

The building is located in the eastern part of the city, standing alone. The two-story, covered with tetrasloped roof. The main entrance is arranged on the central axis of the structure in volume of significantly developed central projection in the facade. Separately standing, the building has definitely solved all the facades of the main release. As a means of decoration  the classic order is used: the most complete of its characteristic elements is shaded in solving the central projection in the facade in the second floor and attic crowning. 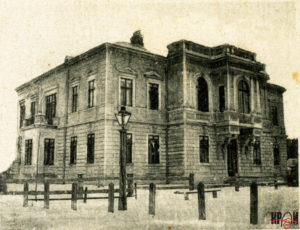 The monument was built at the turn of 19th -20th centuries as the house of Chamber of Commerce, which operated until 1929 after its closure there was  placed a  two-year trade school, which eventually was reformed in merchant gymnasium. In 1939 the Soviets opened in this building junior high (eight-classes) №II school where teaching was conducted in Russian. It was not until 1941 then the school reopened in 1945. Then it was reorganized into a  secondary one. Starting with the  next school year Ukrainians  began to study in former gymnasium building and the school was entirely in Russian. In 1977 the school №2  moved to new building. In the building  primary school students of school №1 began to study. In 1997 this school was reorganized into two schools, high school and elementary school.The last housed in a former Chamber of Commerce.

The memorial  is a sample of the original historical eclecticism, and has played an important role in the economic and educational life of Brody.