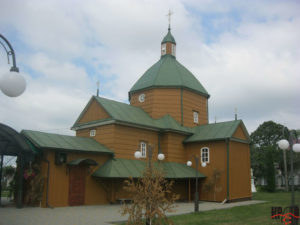 The church is located in the former suburbs of Velyki Filvarky. Basically, the building has the shape of a cross. All church logs are rectangular, while the upper part of the central frame that is above the side logs, built as an octagon. The depth of the side frames are almost half less than their width. The eastern and western logs are not long. The middle frame – the central nave is higher than the side frames and covered with an octagonal cupola (dome in a shape of a helmet), which is completed with the cross. Almost every Nave has two windows. And at the top of the central nave there are four windows. The size of the windows of the temple is small, and they all are strictly round or square. Outside the central nave, porch – the western frame and the apse – the eastern frame are covered with shingles. In the porch, where there is the entrance to the church there are two doors: a higher one– on the west side and a smaller one– from the south. The decorative cornice surrounds all forms of side aisles, it is also clearly visible at the top of the central nave under the roof dome. Only the porch doesn’t have any eaves. As for the side frames of the northern and southern Naves of the church, they are externally covered with vertically straight and covered both the eastern and the western frames with gable roof. In all four facades of the side frames the cornice in the composition of the gable roof forms triangles, original gables. The bell tower is situated near the church . 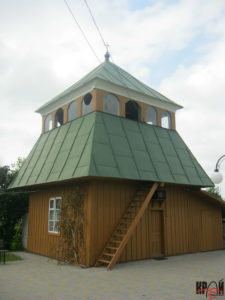 The belltower of the Saint Trinity Church

Traditionally, the year 1744 is considered the time of its construction. However, this date is incorrect. The church was built between 1746-1750 years. Controversial is the fact that in the acts of visitation of the church in 1783 it is mentioned that the church was built thanks to the efforts of the local pastor and parishioners supported by Vintsentim Potocki. And as it is known, he became the full owner of Brody only in 1770.The church constructed in the late 1740s of the 18th century might have burnt down, and in its site there was built a new one.

According to the published in 1860 descriptions of the temple, the interior of the church looked like this: «… its main altar was built in 1829.On the right there is a side altar of Our Lady, and on the left –the altar of the crucifixion of Christ …».

After World War II the church was closed and used firstly as a driving school and then stood empty. In 1990-1991s it was restored. Of course, while restoring the memorial, some external parts of the temple were made again, but their style was saved. What concerns the Interior of the St. Trinity church, it was almost done again. From old things only a few icons were preserved, and one managed to return the Holy Gate. The today’s iconostasis, frescoes on the walls, icons, thrones, the balustrade of upper gallery, where the choir is situated and the balustrade above the presbytery are of modern constructing. The church is used by the local community of the UGCC.

Today it is the only surviving ancient wooden church in Brody built in the style of the Ukrainian folk architecture.