Brody – an ancient town located in the eastern part of Lviv region. The town lies on the border of the  Ukrainian historical lands – Galychyna,  Volyn and Podillia. Geographically, this is the area of the Small Polissia, that “touches” the foot of Voroniaky and Kremenets  Hill Ridges. The town lies at latitude 50 ° 04’41 “north  and at longitude 25 ° 09’15” east . 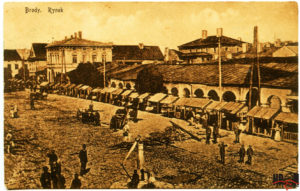 Rynok square in Brody at the beginning of 20th c.

The population of Brody is 24 thousand people.

The town is named after marshland and crossings (fords,”brody”in Ukrainian ), which had long existed here.  Brody stands on the river Suhovylka  (the basin of the river Styr), which is often dry and sometimes affluent.

The first settlements around the city emerged in the era of the final Palaeolithic – Mesolithic (12 – 8 thousand years ago). As the findings confirm,on the banks of the river Suhovylka the settlements existed in the bronze day (Horodotsk-zdovbytsk culture) Pre-Scythian time (Vysotsk culture, the 9th-7th  centuries BC.) Late-Roman time (wielbark culture,  the 2nd  -4th  centuries. ) the period of Slavs and Kyievan Rus.

The first record of the settlement is associated with Brody,mentioned  in the “Instructions of Volodymyr Monomakh to children” . In spring and winter of the year 1084 there were meetings between Chernihiv Prince Volodymyr Monomakh and Volyn Prince Yaropolk Iziaslavych. 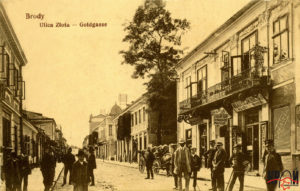 In the 14th  century there was a struggle for the lands that were on the border of Galychyna and Volyn principalities  between the Polish government and the Grand Duchy of Lithuania. After the Battle of Olesko in 1432 the lands were moved to Poland.

In 1441 the Polish king gave the lands of Olesko , which included  Brody,to the landlord Jan Seninskyi. In 1511 Brody became the property of the  Kamenetskies.

In 1580 Brody was bought by Belz governor Stanislav Zholkewski. He received Magdeburg Law from King Stefan Batorii (1584), published the locating instrument (1586) and founded the city Lubych (named after the family coat of arms). However, the name didn’t catch on and  already in the seventeenth century the town is  called Brody again.

In 1588 there already existed a castle, a church, a Catholic church, a market. 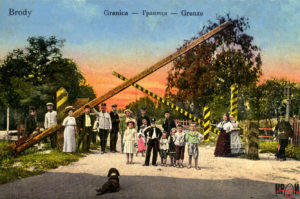 In 1629 the town was transferred to the Koniecpolskis .The Great Crown Hetman of Commonwealth Stanislaw Koniecpolski turned Brody into the perfect town-fortress.The Pentagonal castle, built on the western side of Brody, was a part of the general fortifications of the town.The process of building in the urban areas was carried out regularly (streets intersected at right angles), and was “inscribed” in the oval of the earthen bastion fortifications.

In 1648 the troops of  B.Khmelnytskyi captured Brody and laid siege to Brody Castle  for 8 weeks.

After the first division of Poland in 1772, Brody became a part of the Austrian Empire and became a border town on the border with Poland, and since 1795 – with Russia. 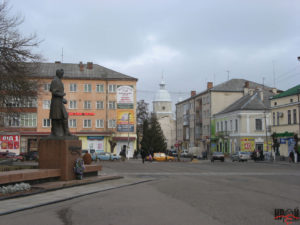 In 1779 Brody received the privilege of “free trade town” (valid until 1880).Thanks to it  in the first half of the nineteenth century the border town became a significant economic center of the Austrian Empire, “the warehouse of  goods of the East and West.” The population of the town increased  to 20 thousand. (Jews were about 70% ).

In 1869, the railroad Lviv-Brody was laid . And in 1873 a rail link with the Russian Empire was established.

In the late nineteenth century there were a lot of enterprises in Brody  (a candle factory ,a chicory plant,a  rum and liqueur factory,a flax spinning factory,a brick plant,a steam mill,a  sawmill),  national (Jewish, Polish, Ukrainian) Cultural and Educational Societies were organized. In 1865 the gymnasium was founded .

With the outbreak of World War Brody as a border town was caught by a period of war. During 1914-1920 years the town 12 times passed from hand to hand.On November 1, 1918 the town became a part of WUPR. 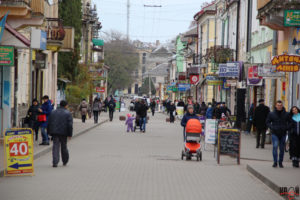 During the Second World WarBrody took place in great battles: in June 1941 there was a big tank battle and in July 1944 – the battle is known in history as “Brody pot”, which was attended by Ukrainian Division “Galicia”.

During the war the city suffered considerable damage, the central and western parts of the historic downtown were destroyed. In the Soviet period, Brody was an important military center, there were several military units and great industry.

Today  Brody is a regional center of Lviv region. The city has several industrial enterprises. Here there is a Pedagogical College named after Shashkevych,  a gymnasium named after Ivan Trush, three schools, a school of aesthetic education, sports schools, centers for children and teenagers, adult and children’s libraries, Brody  museum of country studies. 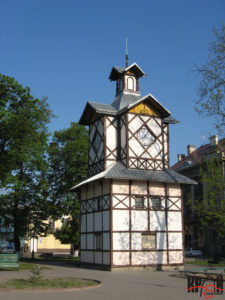 Clock tower on the maidan Svobody

Brody is rich in  history, architectural monuments has saved the planning system of “ideal city» of the seventeenth century.The location is convenient for tourists as it is located at the crossroads of major highways, here is the railway Lviv-Zdolbuniv. Staying in Brody, travelers can explore not only the town but also  go to the famous tourist sites of Ukraine, located in a radius of 60 km (castles in Zolochiv, Olesko, Pidhirtsi, Dubno, Kremenets, monasteries in Pidkamin, Pochayiv, Pidhirtsi, Plyasheva etc.). It is famous for its  beautiful landscapes and many natural sites that are part of the National Park “North Podillia”.