The object was included into the State Register by Lviv regional council decision №495 on 17 September 1991 and was given a protective №1744-m (address: 14,Franko Street).

The temple is located to the northeast of Rynok Square. The orientation of the church is traditional .The foundations of the building are designed in the shape of a cross. A rectangular porch is adjacent to the little pews. In the octagon tower there is a clock with a dial mounted on three sides. All windows are with arched half circular completion. 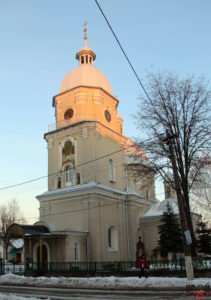 Although traditionally the year 1600 is considered to be the time of its construction , the first documented mention of the church comes from the late 1580s Originally the building was wooden.The proof of this can be a fragment from the description of the town, made by the stranger Ulrich von Werdum in December 1671, which states that in Brody there is “… a church built of stone and three Russ’ wooden churches …”.

The date of building of a new stone church remains unidentified until the end. According to Lviv art historian V.Aleksandrovych, this occurred about 1745-1749 years. In church visitation acts on September 18, 1783 the first description of its facilities is presented, which shows that the church had already the present appearance. However, the clock on the tower was placed later (when – it is unknown). The date of the church construction is not specified in these acts.

From the descriptions of the church published in the 1860s the interior of the temple looked this way: “In the main altar there is a painted canvas with the icon of Our Lady with a veil and the icon of Christ crucified. On the both sides of the throne there are carved wooden cherubim. The transparent royal gates are carved from soft wood, as well as two side doors in the wall, decorated with iconostasis, painted al fresco. In the chapel of Our Lady, which is located on the right side of the temple there is an altar with the icon of the Virgin and the second smaller one with the icon of John the Baptist, taken from the Church of the Triumph of the Holy Cross. In the chapel of St. Trinity, which is located on the left side of the church there is a large altar of the Holy Trinity and a smaller one of the Holy Cross .In the both chapels there are the tombs with the inner entrance closed with grating windows”. 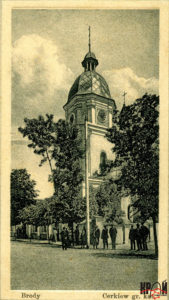 The Church on the early 20th century postcard

In the 1902-1904 the church restoration was conducted according to the project of S.Spero. Around this time the building was surveyed by the Society of the Conservative members in Eastern Galicia.They discovered the fact that the central nave was built of broken stone,mean while the chapels and the tower were built of brick. That led them to the conclusion as if the temple was originally a church, which was passed to the Rusyns in the middle of the 18th century. But, as it is noted by most members of the Society, this assumption contradicts archival documents.

The former residents in their memoirs about the city called the masters, who in the first half of the 20th century painted the church, particularly Anatol Jablonski, Osinchuk and the professor of Brody gymnasium, a painter Mykola Fediuk.

The temple did not undergo any damage at the time of World War II, was active in the Soviet times and therefore, it has been preserved in a very good condition up to now. Nowadays, it belongs to the local community of the UOC. The memorial is a sample of the original church Baroque art and is, probably, the only example of combination of church architectural forms (high tower) and Church (dome ceiling) in Ukraine.