The building is located to the north-west from Rynok Square. 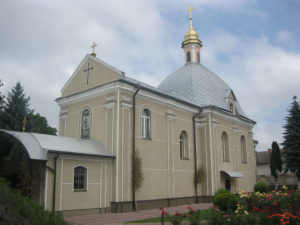 In manuscripts the temple was first mentioned on May 3rd and 18th, 1628 In particular, the document of the May 18th, 1628 refers to providing the local tradesman John Ulechka with money for buying in Gdansk a bell for the church , what was the reason for the historian John Sozansky ( 1881-1911) to prepose the church recent construction. Perhaps because of this, the traditional date of the construction of the temple is considered to be in 1625.The financial assistance for the construction of the church must have been provided by Greek and Armenian merchants. According to the historian Benedict Ploschansky (1834-1902), the Iconostasis and the Holy Gates for the church were made at the expense of Greek merchants. Those people used to take care of the temple condition, that’s why it was also called «the merchant church». Subsequently, the church began to serve as a parish one for the small suburb of Filvarky.

Basing on the acts data of visiting the church on November 24th 1783 and ratification of Józef Potocki on March 15th 1763 (from 1760 to 1770 he was co-owner of Brody) one could argue about the construction at the site of the old, most likely wooden building, which probably burned in a fire in 1763, a new brick church circa in 1763-1765 years. However, there is an alternative version, according to which a new church was built in 1749 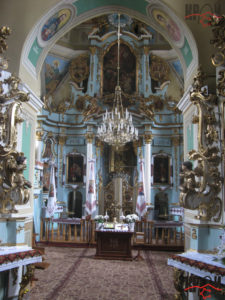 According to the published in 1860 descriptions, the temple building had a western entrance porch with a bell tower above. The church had neither chapels nor a sacristy. From the interior: the main altar with painted on canvas icon of Christ, decorated with cherubim. Before the altar there are the Holy Gates, decorated with images of the four evangelists and the bishop’s miter. The main altar was under a canopy and had the Greek icon of the Virgin in silver clothes, the Epiphany icon and the icon of the Crucifixion of Christ above. In addition to the main altar there were five more side altars:of St. Nicholas (next to the door), of the Entry of the Blessed Virgin Mary,of St. Thecla,of St. Barbara,of St. Onuphry, the latter possibly came from a dismantled church of the Triumph of the Holy Cross. At the entrance to the temple on the left side there was a visible throne of Christ Crucifixion with the man’s hight icon .The noteworthy things from the church cutlery were the gilded, mosaic silver bowl, donated to the church (according to the label) by Brody Philistine Yosyfivna Lvivska and dated by the year 1600.During the rebuilding of the temple in the second half of the 19th century the bell tower was dismantled, at the same time the extension to the eastern part of the north wall of the church and the south door were added. A few years after World War II, the church was closed and looted. The building was transferred to the ownership of the local tradescompany and used as a warehouse. Later, the church was restored and solemnly consecrated on December 4th, 1990.

The main value of the temple is the interior , icons, altars in the style of the late Baroque.