The object was included in the State Register of monuments of local importanceby the decision of Lviv executive committee №280 on 21 May 1991 as №1751-m (address: 9 Zolota Street, 8 Academic V.Schurat Street ). The memorial is in communal and private property. 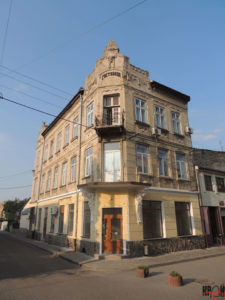 The House of the former Bristol Hotel 1909

The building is located at the corner of Zolota Street and Academic V.Schurat Street, rectangular, three-storey with a gable roof. The entrance to the ground floor is located on the corner of the building, to the first is from Academic V.Schurat Street. The building facades are decorated with stucco décor of secessionist nature, the storiesare fragmented with profiled cornices. The ground and the first floors are rusticated. Cornices and window frames, doors are decorated with moldings. On the first floor there are windowsill mirrors with image of mind. The balcony of the first floor is supported by Atlantas, its fence with brick and stone has been lost. The fence of the second floor balcony is blacksmithed of secessionist nature. The main gable shaped as attic is crowned with the monogram of the letters «MZB « (apparently cryptic name of the first owner of the building), underneath there is a mascaron with the face of a young girl with hair of the Nouveau period, which symbolizes the ancient Roman goddess of dawn Venus, and below there was the inscription «HOTEL» that after World war II was replaced with «ГОСТИНИЦЯ». The year of conctruction is showed in the inscription on the pediment lateral «1909». Internal planning structure has been significantly changed. The interior walls are made of wood.

The bas-relief on the facade of the former hotel

The hotel «Bristol» was built in 1909 on the corner of the main Zolota Street (then Stephanie street) and Philip Zucor Street (now Academician V.Schurat Street). The building was the real gem of the city, that is why we often encounter her image on postcards of the First World War and in the interwar years. Its name comes from the large port city of Britain, a powerful trade center – Bristol. The very name is a certain symbolism. From the Old English word «Bristol» means «city on the bridge». We see a certain analogy with Brody – settlement at the fords, «brody» in Ukrainian. 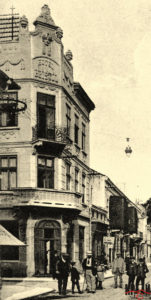 The Bristol Hotel. The postcard, circa 1910

The hotel was designed for 16 people, and on the ground floor there was, as already noted a restaurant and a casino. In the 1926-1927s M.Froydenhem was the owner, and in 1928-1930 years – M.Brochyner. In the 1930s the hotel passes into the hands of Ukrainian businessmen. As the hotel the building was apparently used for some time after the Second World War. Now the ground floor of the building is being used for trade. The first and the second floors are public institutions.

The monument is one of the most interesting examples of secession in Brody, and became known in many countries due to its description in such famous works of Y.Roth as «Radetzky March» (1932), «False Weight» (1937) and others.