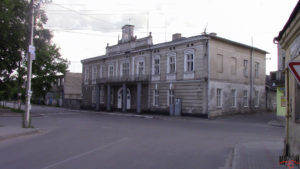 The object was included in the State Register of monuments by the  decision of  Lviv executive committee №280 on 21 May 1991 and was given a protective №1763-m (address: 16, 22nd January Street).The memorial is a  communal property.

The building is located to the  east of the  downtown, at the corner of  16, 22nd January Street, and Shevchenko St.This is a  rectangular building with a highlighted colonnade on the facade of Tuscan order and arched entrance. Three-dimensional arrangement is the  central axial. It is a  two-storey construction.  The main facade is rusticated, the first floor is divided with eaves. Window openings are  decorated with triangular and semicircular attic. In the central axis of the first  floor there is a balcony  furnished with a metal fence. There are the  interior stairs. 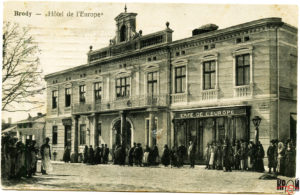 The Europe Hotel on the postcard

The building was built in the first  half of the 19th  century. Modern appearance was gained at  the beginning of the 20th  century. At one time there was a  well-known in the town hotel “Europe”. Since the late  1930s it had been  used for the needs of Ukrainian business. After World War II military headquarters were located here, and then the regional military department was here. The building is an interesting model of neoclassicism in Brody.