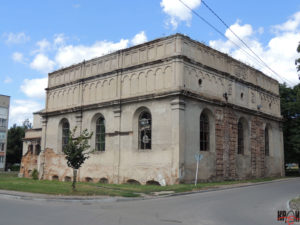 The property is included in the State Register of monuments by the Council of Ministers of USSR №970 from 24.08.1963 g. and was protective №403. The monument has national status.

The Synagogue is located in the Southwest of Rynok  Square. In 1742, due to frequent fires, very wealthy at that time the Jewish community decided to build a masonry synagogue. However, local authorities under  the pressure of  Lutsk bishop would not give their permission for the plan and demanded kahal payment in the amount of PLN 350 per year for maintenance of one student in Lutsk Seminary. Only after kahals had agreed , the project was started. 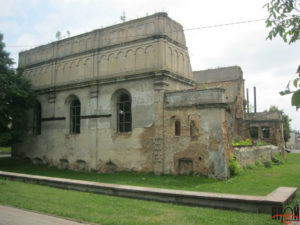 View of the ruins of Synagogue from northside

The date of construction of the temple is 1742 (5502). This is evidenced by the inscription on the eastern side of the attic, as outlined in the description of  synagogues of Zolochiv district from 1826.The cornerstone of  Great Synagogue was  laid by Yitshak Horowitz, the son of Jacob Horowitz of Bolekhiv, while the funds for its construction were given by  Jacob Yitskovych, the son of Yitshak Krukiver. 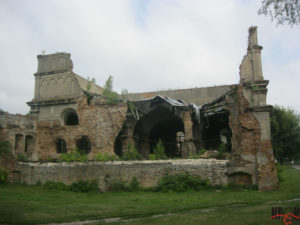 View of the ruins of Synagogue from westside

The Great Synagogue history of the following years is unknown. Its past  is surrounded by legends. The temple is  associated with the names of the founder of Hasidism Yisrael ben Eliezer (Baal Shem Tov) (1700-1760) and the Patriarch of Belz Rokeahiv rabbis, Jewish miracle worker and rabbi Shulim. 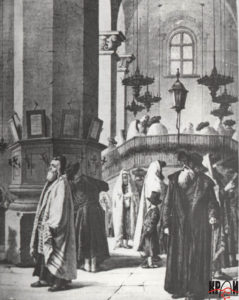 Interior of Synagogue Engraving of the 19th century

After the capture of Galicia, the Austrian government in 1777 allowed to repair the roof of the synagogue, and to repair the gutters.On  May 5, 1859 theTemple  fell again a victim to a great fire, which burned  almost the whole city. Great Synagogue facade renovations took place in 1903, as evidenced by the inscription on the north side of the western extension and postcards of  that time. 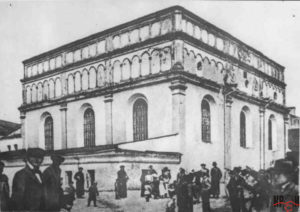 During World War II, the synagogue suffered significant damage. The first time the memorial was restored in the second half of the 1960s. And while it served as a warehouse, and then stood empty. In 1991, local authorities tried to restore the building for further adaptation like an art gallery, but because of lack of money all stopped. Now the temple is in ruins. The northern and southern extensions of the building have been lost. In the summer of 1988 the western wall collapsed, and since 2006 the vault  began to collapse systematically. However, the monument is one of the best and largest examples of synagogue building in the world, due to this its utter destruction is unacceptable.