The object was included in the State Register of monuments of the local importance by the decision of Lviv executive committee №280 on 21 May 1991 and was given a protective №1745-m (address: 6 Prosvita Street). The memorial is in communal and private property. 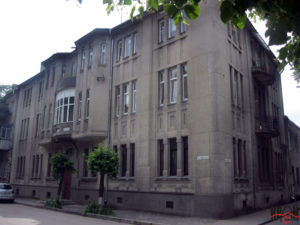 The building is located in the eastern part of the historic core of the city at the corner of Prosvita streetand Kotsiubynsky Street. It is “Г” -shaped in plan, three-storey, with cellar, covered with gable- roof. The main facade is segmented with pilasters. The main entrance is decorated with ellipsoid frame in the window mount. The facade is allocated with two bay windows. The balconiesare connected at the first and the second floors. A typical element of the facade is triple windows on all floors. Plastic heat is solved by planes sink. On the side facade of the first and the second floor the balconies are shaped with metal fence.

The house was built in the beginning of the twentieth century. In 1967 the mansard roof on the second floor was rebuilt. The original part of the interior of the building is a metal staircase. The monument is a striking example of secession in Brody.