The object was included in the State Register of monuments by the  solution of  Lviv executive committee №330 on  24 June 1986 and was given  №674-m (address: 4 Kotsiubynsky  Street). The monument belongs to  the municipal property. 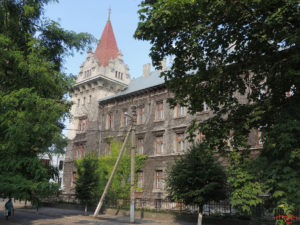 The Seat of Former County Court

The house is located to the east of the downtown. It’s a  three-storyed building  with high-basement, “Г” -shaped in plan,with  stick two volumes emphasized in terms of square tower, slightly higher from developed cornice and a triangular attic with four sides. Building roofs are gabled, the roof of the tower  is a four-sided tent,  swift with an  apple and decorative spire. The groung  floor of the buildings is  decorated with rustication  , the first and the  second are  gray with silica brick facing. The planning system – Corridor with Halls in the stairwell. In the courtyard of the house there is an adjacent rectangular two-storey, high  construction – “prisoner’s house.” 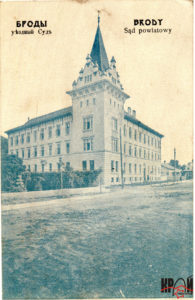 The County Court on the postcard of the early 20th century

The monument was erected in 1910-1913 years  by architect Hipolit Slavinskyi. The construction work was led by Michal Dombrowski. With the exception of the war years up to 1941 the building was used as a court house, and in 1945 was transferred into pedagogical college. In 1988-1989 there was  an overhaul of the building roofs. During the restoration work carried out by the regional studies and tourism cooperative “Brody”,  the original appearance of the tower was restored, arranged tiled roofs cover instead of  slate. In 2002 the south west side of the roof was replaced with tin shell and the  remaining roof was re-blocked with red tiles about 2010.