The Church of the Triumph of the Holy Life-giving Cross Church, The ancient Catholic Church,built in the 1660s.

The object was included in the State Register of monuments of the local importance by Lviv regional council decision №173 on 10 March 1994 and was given a protective №2865-m (address: 9 Stus Street). 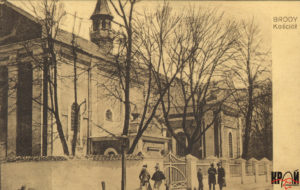 The Catholic Church on the early 20th century postcard

It is located to the east from Rynok Square. The building is rectangular in plan, with half circular windows, segmented with pilasters, covered with a gable roof, topped with a small decorative tower earlier, and with three domes now. The basic volume is adjacent with four-sided apse with half circular windows and a round window from the east. It is segmented with pilasters, with side chapels from the north and south with gable roofs and gables, and with a similar but a bit smaller chapel on the south-west and large three storey sacristy on the south-east.

On March 11, 1646 Stanislaw Koniecpolski, dying, in the presence of the priest made a will in which Alexander, his son was ordered to build a stone church for the construction of which the father left his son a certain amount of money. Alexander was ordered to put the bodies of his parents to that temple, and there had to be kept the service for their souls. His mother, Christine Koniecpolski, who died in June 1645, bequeathed 1000 PLN to that purpose, as well. 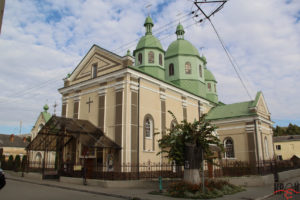 The Church of the Triumph of the Holy Cross

But only Alexander’s son, Stanislaw Koniecpolski, managed to build the church somewhere in the early 1660s. The answer to the question – why the stone church was consecrated under a new title- remains unknown. (The previous wooden one held the title of Saint Stanislaus). Although we learn about this from the text of the 1750s document, which refers to the payment of a certain amount by Jews for the celebration of the Exaltation of the Holy Cross.The new title, in our opinion, was given to the temple immediately after its construction, because after 1678 in Brody another Dominican St.Stanislav church was constructed . The side chapels were, probably attached to the temple later. According to the mention of 1750 the founder of one of them is Prince Nicholas Hotynskyi.

Around 1696 the church with a bell tower suffered significant damage from fire. Some of the temple utensils and the icon of Yazlovetska Mother of God, brought to Brody by Armenians in 1676 were saved.The reconstruction of the church was started by the Bishop of Bakiv, Adam Chesheyko but the completing of the restoration work was prevented by his death.On June 16, 1698 he made a will in which he gave 1000 PLN for the reconstruction of the temple , tin for windows and lanterns, and charged the regular supply of grain and livestock in order not to stop the restoration work.

After the death of the Bishop, a Franciscan monk Stanislaw Franciszek Behanskyy, who became Bakiv bishop (these bishops were expelled from Moldova and the Polish king Jan III Sobieski appointed Brody as a place of their stay) completed the reconstruction of the church in 1699 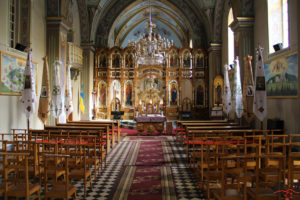 The interior of the church

According to the inventory it on 15 November 1853 and its amendment of 1859, which was made before the fire that occurred in Brody on May 5 that year, the parish church of the Triumph of the Holy Cross “… as a resul of the local order on 26 September 1825 was enlarged, covered with tiles,with shingles later, and with tin now. In addition to the main entrance, there is a side door on the north side. On the right and left sides the chapels are attached. All windows have grating. To the right of the main altar there is the sacristy and the treasury over it. In the main altar there is a painted canvas showing the image of Christ crucified on a screen depicting the Savior’s instruments of torture. On both sides there are statues of Our Lady suffering and St. John. In one of the side chapels there is the second altar of St. Anthony with the canvas depicting St.Nicholas. On the opposite side there is the altar of Our Lady of with the canvas of St. Trinity. In the presbytery on both sides there are attached to the wall boxes of relics. The carved wooden pulpit is without any other ornaments. The organ, repaired by the priest Sahahyevich, contains all the octaves with eleven mutations, has 54 keys, without pedals. Baptistery is made of black marble, with wooden cover. The both chapels with grating windows contain tombs and have the entrance from the middle of the church. Outside the church, at a cemetery, a stone fence of which is demolished in 1846,in the north side there is a simple bell tower built of bricks. It is covered with tiles, four bells are located between its columns: one weighing 14 metric centners, the second one – 8 metric centers, the third one – 3 and a half metric centners, the fourth one – 20 pounds. This bell tower was built in 1844 … “.

The temple has been survived. From 1946 till 1993 it was used as a sports school, and then it was transferred to the community of the UGCC. During the repairs the appearance of the church was badly distorted with the addition of three domes onto it.