The object was included in the State Register of monuments of the local importance by the decision of Lviv executive committee №280 on 21 May 1991 and was given a protective №1746-m (address: 1, Akademik V.Schurat Street). 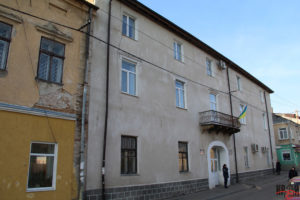 (It should be noted that in 1996 during the making of passports for the monuments of local importance in Brody, in connection with the renaming of streets and squares of the town, this object was confused with the stone house in 7a Stus St. and the  passport was made for it, having provided  the status of architectural monuments of local importance for the latter one). The monument belongs to the communal property.

The building is located in the eastern part of the quarter within the red line of  Academic V.Schurat Street.It is  three-storeyed  with a gable roof. ( The second  floor was completed in Soviet times). The façade is without any decoration,  only the  classicism sandriks over the windows of the first  floor are available. In the center of the facade on the first  floor there is a metal  balcony  with a decorative fence with metal brackets. The house held two arched entrances. The first and the main one is from Ak. V.Schurat Street, the  second one is from the side. The latter one represents the old wooden gate bound with tin. The house has a cellar. The monument represents the classical era in Brody.