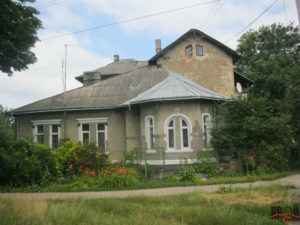 The dwelling house of the early 20th century

The building is located to the east of the  downtown, on the corner of  Kotsiubynsky St. and Plastuny St.  The space  composition of the building is solved in the combined system plan with the  shift of one and two-story volumes. The building has a cellar under the whole volume. It is covered with complicated in shape roof. In the southeastern part there is a  terrace, enclosed with metal grate. The flexibility of the fasades is solved by speakers and disengaging volumes, coupled narrow window openings, joined with  head molding and sill cornices and arched windows and doorways, decorated with stucco and frame rust.

The monument was built in the beginning of the 20th  century and is an example of the Secession villa. In the interwar period it belonged to the Polish state notary Jan Volnik. Now the  building has been  converted into a dwelling house with a couple of flats

The Memorial  is an original example of  Prague seccession and is closely connected  with the history of the region during the twentieth century.