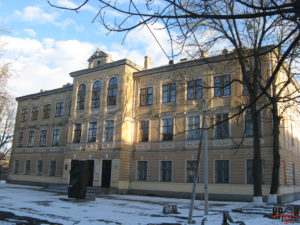 The object was included in the State Register of monuments of local importance by the decision of Lviv executive committee №330 on 24 June 1986 and was given  №677-m. Address: 2 Kotsiubynsky Street. Memorial  belongs to communal property.

The building is located to the east of the downtown, in a distance  from the red line on  the special territory belonging to the memorial. The building complex is in the sense of  a three-storey cellar. The main entrance is decorated with  risalit pointed gable. The ground  floor is decorated with rustication, window and door openings are  framed with castle stones, sandriks and others. The plane walls are segmented with pilasters and mirrors. The planning system is in the passage shape. The space solution of stairs and staircases  is extremely interesting. 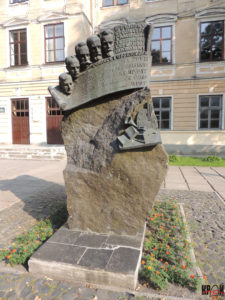 The monument to the outstanding people, who studied here

The ceremonial laying of the cornerstone for the new school building was held on 10 May, 1881, and on 4 September 1883 the school started  functioning. The gymnasium was named after the  heir to the throne of the Austro-Hungarian Crown Prince Rudolf. During the First World War the building was occupied by military barracks and hospital. In the interwar period, there was a Polish state gymnasium named after Yu.Kozhenovskie, and with the arrival in 1939 of the Bolsheviks – high school number 5 in  Ukrainian language. At the time of World War II, the building was again occupied by the barracks, which housed German military. After the second coming of Bolsheviks former school building was transferred to the secondary school №1. In 1997 school was revived, and two years later she received the name of the famous Ukrainian artist Ivan Trush. 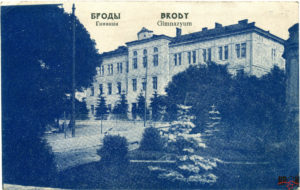 Brody Gymnasium on the postcard of the beginning of 20th century