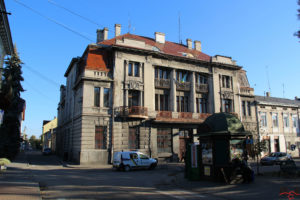 The object was included in the State Register of monuments  by the solution Lviv executive committee №130 on 26 February,1980 and was given №429-m (address: 10,Maidan Svobody).The  memorial is in communal property.

The building is adjacent to the west to the trunk area north side of Maidan Svobody. The three-story building of cube shape with a mansard roof covered with red tiles. The building has definitely settled south (main), west and north facades. The main entrance is arranged on the central axis of the structure in volume weakly developed central projection in the facade. The main elements of the decor of the main projection in the facade on the second and third floors are four rusticated engaged column Dorian warrant and two identical profiles bas-relief medallions with Roman god of trade, profit and enrichment, the patron saint of travelers – Mercury. Previously, the two top edges were two main risalit Attica in the form of vases. Also important elements of the main facade is massive wrought-iron balconies and windows. The main part of the building windows are narrow of  rectangular shape. 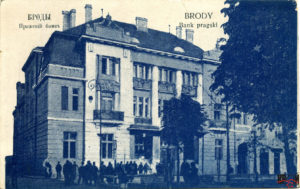 Prague Bank in Brody on the 20th century postcard

The building was built in 1909-1911 as a  branch of Prague Credit Bank and was used for other purposes. Only in 1914 during The First  World War there was the Austrian city council. During WUPR(The West Ukrainian People Republic ) – the military command of Brody. From 26 July to 18 September 1920 Bolshevik Revolutionary Committee- Brodsky County led by I.Matviikiv. From 1921 to 1939 there was Kresovoi cavalry brigade command  led in 1934-1936 by  known Polish military leader, Gen. Wladyslaw Anders (1892-1970). After World War II  Brody RCP (B) was located, and from the 1970s there was the District police department. Now there are the Police, the Security Service and the court here. 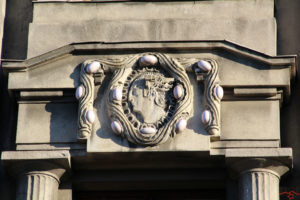 The bas-relief of the ancient god Mercury. Façade