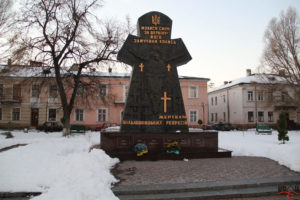 A memorial of local historical significance (security no. 1441, order number 528, dated 19.07.1995). The monument was opened in November 1993 in honor of the 75th anniversary of the November  and is located in Independence Square park. The monument was created by the sculptor Boris Romanek and the architect I. Tymchyshyn. The monument faces the east and was designed in the shape of a cross. In the upper part of the monument there is a Tryzub, (the trident, a national symbol of Ukraine) and the words “Pray son: for his country he was tortured.” Below in the form of a relief, the image of a tortured, crucified family, framed by numerous crosses. The composition represents a long-suffering Ukraine – a man who raises his suffering face to the sky, a woman who bows her head to her husbands shoulder as if seeking protection, and between them – a little angel – an unborn child. On the second side of the monument, there is an image of Mary, the Mother of God, with Jesus, they are both clothed in a vestment, surrounded by the phrase: “For Ukraine, for her freedom!” Under the inscription is depicted St. George, who fights a snake. There are inscriptions on the sides: “A-r (Architecht) Timchishin I.P.”, “S-r (Sculptor) Romanetz B.O.”. Below – on the granite pedestal of the monument – the names of the prisons and places where prisoners of war were held, from where the land was laid in a special niche at the foot of the monument. In the eastern part there are 6 signboards (from left to right): «Soil from Siberia», «Soil from Komi», «Soil from Kazakhstan», «Soil from the Far East», «Soil from Mordovia», «Soil from Yakutia» . 6 plates in the western part: “Soil from Zolochiv prison”, “Soil from the Rivne prison”, “Soil from the Kremenets prison”, “Soil from Lvov Bridgokot (prisons)”, “Soil from Zamarstinivskoyii prison”, “Soil from the prison of Lonsky”. In the northern foot of the pedestal: “Soil from the city of Brody and villages of the Brody region”. In the southern part – “Soil from the edges of the near and far abroad”.

Literature: Kovalchuk G., Monuments of the city of Brody / Bryshchyna – edge on the border of Galicia and Volhynia. Issue 3. (Materials of the fourth local history conference devoted to the Day of Historical and Cultural Monuments). – Brody: Brody Historical and Local History Museum. 2010. – p.28-34.