During its long history the Jewish community of Brody had three cemeteries (Hebrew Cemetery is called “bet olyam” – literally – “house of eternity”). The first one was somewhere near the Great Synagogue for only 14 years (from1586 till 1600). Then local Jews managed to buy a plot in the suburbs of Velyki Filvarky and lay the so-called Old Jewish cemetery. Over time, its territory was expanded  repeatedly, and it had carried a burial function by 1831. However, being inactive, this cemetery existed until World War II and was destroyed during the Nazi occupation in 1941-1944. After the war, on the site the Soviets built a municipal stadium. 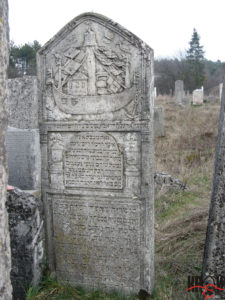 In 1831, in connection with the spread  of the cholera epidemic, the Austrian government made local Jews lay new, the third cemetery, at a considerable distance from the city. Accordingly, Jews purchased a plot two kilometers to the north of the center of Brody, which belonged to the suburb of Mali Filvarky. This new Jewish cemetery operated for more than 110 years until the time of the Holocaust.

New Jewish cemetery in Brody was in the shape of somewhat incorrect rectangle that entered the forest in the west and in the north. Its dimensions from the east to the west- 500 meters, and from the north to the south – 150 m. However, the cemetery has not been fully utilized because regular burial stretching from the east to the west is about 350 m. Total area of the facility is about 8 hectares and areas with regular burials cover not more than 6 hectares,what is more than 75% of the total area.

Conventionally, the cemetery can be divided into four main parts. The largest of them and  the most important one has 125 numbered east-west rows, each of which runs from  the north to the south with a slight deviation to the north-east. Between these rows there are still 35 rows more. The second part is adjacent to the main part in the south-east and is located directly at the beginning of the cemetery. It has 16 unnumbered series and its main target is the Ohel (translated from the Hebrew “tent”) – a superstructure on the graves of Hasidic Rabbi Chaim David ben Yosef and his wife Adele, who both died in  1931.The third part – a group of preserved tombstones – Matseva (approximately 46) located on a natural rise in the northeast corner of the cemetery.The fourth part – the western outskirts of the cemetery without a regular burial. 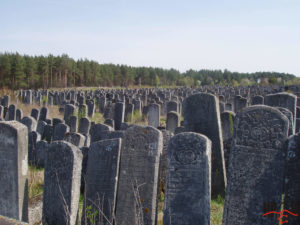 The total number of objects stored in the cemetery, namely Matseva survivors, their fragments and traces of a burial is around 9700. Only  5900  Matseva can be considered survived, and several hundred of them (400-500) lying on the ground or even moved elsewhere (especially Matseva of granite or marble). Accordingly, a number of fragments and traces of graves is about 3800. However, it is clear that fixed number of specified objects does not indicate the total number of burials performed at the cemetery. Definitely, that some of the tombstones simply disappeared without a trace. Probably, on the territory of the attraction  about 12 thousand people could be buried.If we add to this number the shot ones (known four mass graves) or simply buried in the cemetery  in the period between1941-1943 the specified number may increase by several thousand.

It also preserved interesting examples of carved ornaments on Matseva, including the images  of the falling house (Matseva of Meir Yitskhak, 1852),of the ship (Matseva of Malk Babad, 1834), Leviathan (Matseva of Peril Ros Roque, 1835), the candlestick with a window in the background (Matseva of Jochebed Tselniker, 1834), a bookcase and a writing table (Matseva of Manes Mordekhai, 1836),of the synagogue, the hand of God,a  sheep and a lemon tree (Matseva of Avraham Jacob Hilferding, 1834 ), beet and sheep (Matseva of Avrahama Eber Briner, 1837), griffins (Matseva of Mordecai, 1836) and others.

At the cemetery there are two Matsevas transferred here from the old Jewish cemetery,the  Matseva of Meir,the father of the Kristianpoliers  (1815) and the combined Matseva of two women: Hannah (1749) and her daughter, Baile (1788).

To the west of the cemetery in 1994 there was opened a monument to Holocaust victims by the famous Lviv artist and sculptor Edward Buchynskyi, who comes from Bridschyna .

The order of the Ministry of Culture on Nov. 28th 2013 №1224  included the object into the state register of the monuments of the historical and monumental art of local importance ( №2960 – LV)