Memorial to prominent figures associated with the Brody Gymnasium

Memorial to prominent figures associated with the Brody Gymnasium 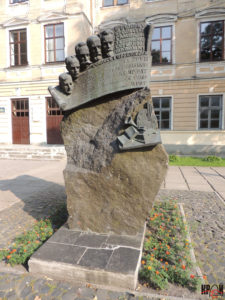 Monument to prominent figures associated with the Brody Gymnasium

This monument was installed on the campus of the I. Trush Brody Gymnasium in October 1986.  The designer is B.S. Romanetsk, a graduate of Brody High School #1, who went on to become a sculptor and member of the Union of Artists of the USSR.  The lives and activities of many talented people who have made a significant contribution to local and world culture are tied to Brody and the Brody Gymnasium.   Among them, a special place belongs to well-known figures of science and culture, who studied and taught at the Brody Gymnasium.

This monument consists of a memorial plaque of bronze alloy on a stone pedestal which faces west. The plaque depicts an expanded sheet of scrolls in the left upper corner on which the high reliefs of Joseph Rota, Osyp Rosdolsky, Vasily Shchurat, Stepan Tudor and Ivan Trush were engraved. In the right corner, the unfurled scroll reads: “In the Brody Gymnasium, the present High School #1, they studied and worked …”. This inscription extends to a second page of the scroll which continues: “From 1881 to 1887, the Ukrainian artist I.I. Trush. From 1884 to 1890, folklorist O.I.Rozdolsky. From 1901 to 1907, Academician of the Academy of Sciences of the Ukrainian SSR V.G. Shchurat. From 1903 to 1911, the Ukrainian Soviet writer S. Tudor. From 1905 to 1915, the Austrian writer Antifascist Joseph Roth “.

Source: Kovalchuk G., “Monuments of the city of Brody”, Bridshchyna: Land on the Border of Galicia and Volynia. 3rd. ed. (Materials of the fourth local history conference devoted to the Day of Historical and Cultural Monuments). – Brody: Brody Historical and Local History Museum. 2010. – p.28-34.